Retrospectives: The Fuel to Continuous Improvement

What is Continuous Improvement? 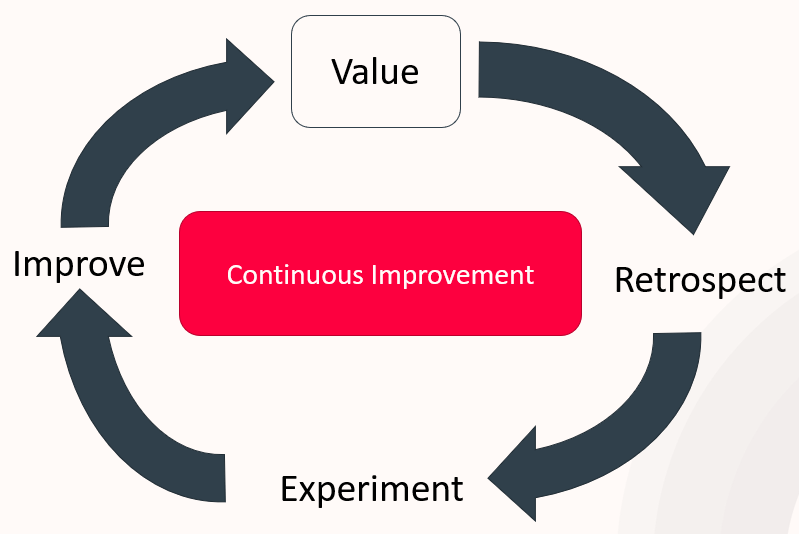 As teams deliver value, it is important to regularly reflect and ask the question: "What can we improve next?". During this reflection, the team brainstorms ideas on what experiments they can try out (also known as actions or improvements). These experiments hope to deliver an incremental gain in the team's value. Repeated experiments encourage innovation, risk and courage, each of which are important for a team's progress. This cycle of Retrospect => Experiment => Improve => Value is called Continuous Improvement.

Let's step back for a minute and look at Continuous Improvement in the world of sport. In 2002, Sir Dave Brailsford joined as head of the British Cycling team. Prior to Sir Dave's leadership, British Cycling had won just one gold medal in almost 80 years. In 2008 Beijing Olympics, Sir Dave led the British track cycling team to 7 out of 10 gold medals! After achieving this staggering result, he turned his focus towards "Team Sky" - Britain's first ever pro cycling team. He led Team Sky to 6 out of the last 9 Tour De France events, an impressive feat to say the least.

How did Sir Dave achieve this? Sir Dave held an MBA and used methods of Continuous Improvement when coaching his teams. He looked for small things to improve in how the team worked together, referring to these improvements as "marginal gains".

"Forget about perfection; focus on progression and compound the improvements." - Sir Dave Brailsford

The team hired a wind tunnel to understand and experiment with aerodynamics. They painted their truck's floor white to detect and reduce dirt on the bikes. They even brought their own mattresses and pillows to each hotel to get a good night's sleep! By regular retrospection, the team encouraged ownership and, eventually, everyone started to come up with their own ideas for improvements which, in the end, led to their huge success. This is the power of Continuous Improvement. "Marginal gains" made frequently in the short term encourages growth and prosperity in the long term.

Continuous Improvement is an Engine

Retrospectives are the Fuel

All engines need fuel. Without fuel, the engine slows down and stops. If Continuous Improvement is your team's engine, then the Retrospective (henceforth referred to as the 'Retro') is your team's fuel. Like an engine without fuel, Continuous Improvement without Retros slows down and stops. A car that does not move forward becomes a stagnant, empty shell that is only nice to look at (many people own such cars!). We do not want to be teams that are stagnant, empty shells with nothing to drive us forward. We want to be innovative and come up with creative solutions to our own problems.

Forward progress gives us satisfaction in our jobs and without that sense of progress, we become scattered and burnt out. But to achieve progress and forward motion, we need fuel. We need Retros to provide fuel to our engine.

What is a Retro?

The Retro is a team meeting where space is created for everyone to learn and brainstorm ideas. It is important that the whole team contributes towards the Retro. A Retro in which only part of the team speaks up is not a good Retro. For example, it is common for the loudest person on the team to speak the most in Retros. Or maybe people do not want to speak up because the most experienced person will argue them down. But the Retro is one of the few places where all members of the team come together as equals. The Retro facilitator should work to ensure all members contribute and have their voice heard.

If the Retro is the fuel to your team's engine, then it needs to be topped up frequently. Therefore, Retros should be scheduled on a regular basis. They should be monthly at a minimum, but ideally more often. In between Retros, the team can test their experiment ideas and gather feedback for the next Retro. The Retro should also close out your team's iteration period. For example, if your team works in cycles of two weeks, the Retro should be the last event of the cycle. By taking a Retro at the end of the cycle, it provides the team the opportunity to plan for the next cycle. If your team has no cycle time, then pick one - teams always work best with defined timelines.

Retros provide the opportunity for the team to give feedback about themselves, their processes, and their product. Whether you have been part of the team for a day or a decade, your opinion is equally valid in your team's Retro.

If you are new to the team, this is your opportunity to speak up about the things you find difficult and frustrating. Are you happy with the onboarding process? Are you invited to pair program on tasks? Do you understand your objectives as part of the larger team? As a new team member, it is up to both you and the team to make sure you are integrated and valuable to the people around you. If something is difficult as a new member, then have the courage to speak up and be honest in your team's Retro.

If you have been with your team for a longer period, you likely have valuable insights on the biggest problems you and your team face. Is the team's quality sufficient? Is there enough innovation and experiments happening in the team? Are you excited, bored, or burnt out with your work? With experience comes more expectations, but that does not mean you should expect to be stressed or under pressure all the time. Use the team's Retro to voice your concerns with your teammates. They just might surprise you!

"What experiment do we want to run next?"

This is the question the team should work to answer in their Retro. Simply having a meeting called "Team Retro" will not achieve improvements without a solid outcome and plan for what happens afterwards. The real work is done between Retros where the chosen experiments are tried and tested. The Retro allows the team to learn about problems, identify solutions and pick an experiment going forward using methods like the 3 questions: "What went well? What did not go well? What should we improve?"

Think back to the experiments Sir Dave ran with his teams. White paint, mattresses, hand washing. These are not particularly profound ideas. I am sure there were many experiments and ideas Sir Dave's team tried which came to no avail. However, each time they tested something out, whether it succeeded or failed, the team learned something new. There was no single experiment that won gold for the team. Each success built on the last until, eventually, enough 1% marginal gains were made to achieve the gold.

A good Retro experiment will like the British cycling team's experiments - short, actionable, and valuable.

It needs to be short so the team can commit to it on top of their other work. "Pair program on critical tasks" is better than "Re-architect our software to support faster deployment".

It needs to be actionable so the team do not jump through hoops to complete it. "Order our stand-up tasks by priority instead of person" is better than "Suggest a new tool for ticket tracking to the organisation".

And it needs to be valuable so that the team can add it to their ways of working. "Scrum Master to close stand-up after 15 minutes" is more valuable than "Create unit tests for this deprecated piece of code".

Agency is a psychological term which means 'I can act on my own behalf'. A team with a sense of agency can act independently to control and change their surroundings. By raising their problems in the Retro, the team empowers themselves to come up with their own solutions. They develop ownership over their environment and push for change where change is needed.

This is a common response when you throw the 'f' word at someone (feelings). While we don't like to share our feelings with other people, it can be a valuable piece of feedback for a team to understand each other's mood. In my team, we start off the Retro with a quick word from everyone on their mood in the past few weeks. We have yet to hear the word 'fine'. Usually we hear 'stressed', 'anxious', 'messy' or 'productive', 'fun' and 'exciting'.

Each answer gives a good insight into how the team's mood is. A positive overall answer indicates the team is doing something well and should continue to do so. A negative reaction indicates something needs to change and the retro should then focus on alleviating those negative points going forward.

Any good team understands the need to innovate. Teams can only make Continuous Improvements if they have created the environment to brainstorm and innovate. Their Retro facilitates such an environment where ideas, both good and bad, are welcome. Without creative ideas, we cannot innovate. Without innovation, we cannot discover those marginal gains Sir Dave talked about. The Retro provides the space to identify these 1% improvements we can bring to the team. If each Retro facilitates just a 1% improvement to your team, imagine the massive changes that could happen over the course of a year.

First things first - setup regular Retros with your team if you are not already doing so. Within each Retro, focus on a particular area the team would like to improve. This could be quality, bugs, meetings, processes, teamwork or anything else the team thinks is a priority. For each Retro, focus on answering the question: "What experiment do we want to run next?" Once the team picks an experiment to focus on, plan it into the next iteration and track whether it succeeds or fails.

Remember, the team's retro does not have to be a complicated or lengthy meeting. However, it does need to be taken regularly to yield those marginal gains and fuel your team's Continuous Improvement.